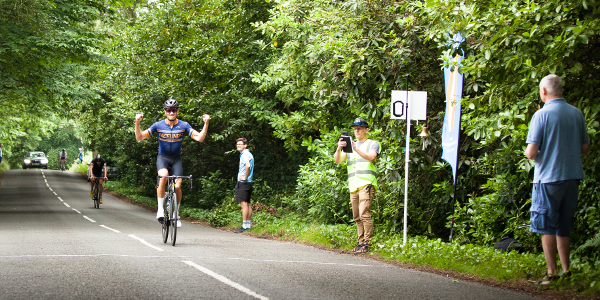 The Afternoon race rolled out at 13:30 on the same course as the Cat3 riders but covering a total of 9 1/4laps. There were numerous attempts by riders during the first half of the race, with several riders making some good progress on the main climb, but eventually, everything was shut down thanks to the strong riders in the bunch.

With 2 to go these two groups had joined forces and now contained Dolny, who looked like he might solo for the win, and Egan and Bonham. Creeggan had lost contact with the leaders though and was now heading back into the bunch. The leading trio had a comfortable 1 minutes advantage over the bunch when cresting the top of the climb for the penultimate time.

Meanwhile back in the bunch, 2 chasers, Lawrence Coyle (Brighton Mitre) and Pat Wright (Paceline), were a mere 15 seconds clear of the front but with the bunch still chasing hard, it was touch and go if these two would stay clear.